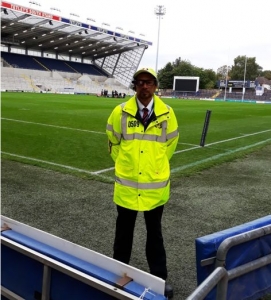 Work colleagues, fans and even the professional rugby players who Preston Binns was detailed to protect responded positively to the idea of the smart glasses. In total, three stewards and five fire fighters tried and assessed the glasses.

Meet Preston Binns – a SIA steward based at the Emerald Headingley Stadium in Leeds, UK and employed by G4S plc, a British multinational security services company.

Being one of the most experienced stewards at the Stadium, Preston Binns was asked if he would test the MONICA smart glasses at the Leeds Rhinos v Castleford Tigers Super League Rugby game on 28th March as part of a MONICA technology demonstration.

The purpose was to see how and if the smart glasses could complement the common communication technologies used at the Stadium, such as radios and body cameras, and assist in improving incident response.

Preston Binns’ initial thought on putting the glasses on was ‘Oh no – Robocop’ but this was soon overcome by the interest from work colleagues and fans who responded positively to the idea of the glasses:

– ‘At first, I got some strange looks from work colleagues and fans alike, however, the glasses created a lot of interest but no real hostility. Once people knew what they were for, they relaxed and even wanted to try them on’, he explains.

The MONICA smart glasses are designed to improve incident response time and accuracy by providing a real-time feed to the control room via the MONICA COP. They have an inbuilt camera with the facility to send images and live film to the control room, receive texts and alerts and send acknowledgements. 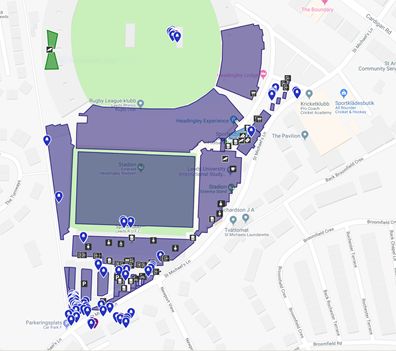 The MONICA user interface in the control room. Here images and video from the smart glasses were displayed together with information on crowd density and flow from the CCTV cameras deployed at the Stadium.

Preston Binns mainly used the camera for stills and video. At some point, he was able to locate, record and zoom in on a flare incident and send this to the control room for analysis and instruction. Overall, he was quite impressed by the features:

– ‘I really enjoyed testing the glasses. They were very useful and easy to use and helped me to focus into potential incidents more quickly and record these easily. I also thought they were a bit of a deterrent. The main benefits as I see them are that they can provide an accurate immediate image and relay that quickly to the control room for a response. So, they save time and that is a real plus when, for example, you are trying to locate an incident or an offender’, he says.

As to the question of whether he would use this kind of technology in the future, Preston Binns has no doubt:

– ‘I would be very happy to use them. Anything that improves our job has to be a good thing. However, one thing that I would improve for personal safety of the operator is to see if shatterproof lenses could be put into the frames to protect the eyes, he concludes.

G4S plc is the largest secure outsourcing company in the UK and Ireland with over 34,000 employees servicing more than 10,000 customers. It has responsibility for the safety and security of all visitors to the Stadium, including fans, staff and national and international sports players and match day officials.

This season, the Stadium will host World Cup cricket and the Ashes – two of the most prestigious sporting fixtures in the world, requiring huge stewarding resources.