Let’s Rock and Roll – together

Accompanied by rock music and sound effects, Steffen Ring from Ring Advocacy presented MONICA in all its glory to standards and IoT experts at the ETSI IoT Week which took place from 23rd to 26th October 2017.

Steffen Ring presented MONICA in the session on IoT development on 26th October. See more videos from the event

The ETSI IoT Week deals with standards and technologies for the smart world and is organised by ETSI – the European Telecommunications Standards Institute which produces globally-applicable standards for Information and Communications Technologies.

Steffen Ring took the audience through all the objectives of MONICA – from noise mitigation at rock concerts to management of large crowds, explaining how MONICA works towards identifying standardisation opportunities for the future IoT, thereby supporting the growth of ETSI standards. 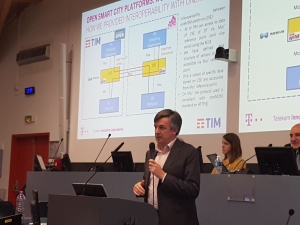 MONICA uses open, ETSI standards and 3GPP global specifications as much as possible to ensure interoperability between devices provided by different manufacturers, and applications developed by different software factories.

This was higlighted in another MONICA presentation, this time by Roberto Gavazzi from Telecom Italia.

In the session on system interoperability on 24th October, Roberto Gavazzi introduced MONICA’s use of the global standards for machine-to-machine communications and the Internet of Things, called OneM2M. Here, he illustrated how OneM2M can be the IoT standard for data exchange across Europe and worldwide, as demonstrated in MONICA.