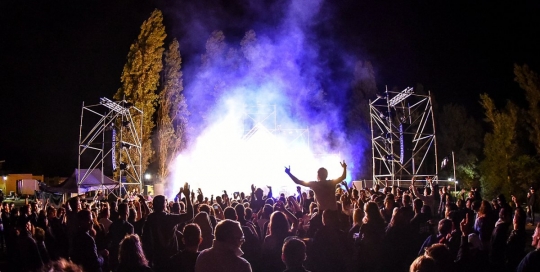 Sound Level Monitoring When assessing sound levels, for instance in public urban areas, it’s important that the measured sound levels are reliable, accurate and traceable. Therefore, it is required to use a type-approved, accredited and calibrated Sound Level Meter, which measures correctly under changing environmental conditions like temperature, humidity, and wind speed. Such installations [...]

This is an non-necessary category.

The wiring scheme for the ASFC system is shown in the figure below. The ASFC system is connected to the primary loudspeakers via the sniffers and to the wireless microphones via the MONICA cloud. All internal components are connected via a DANTE network. 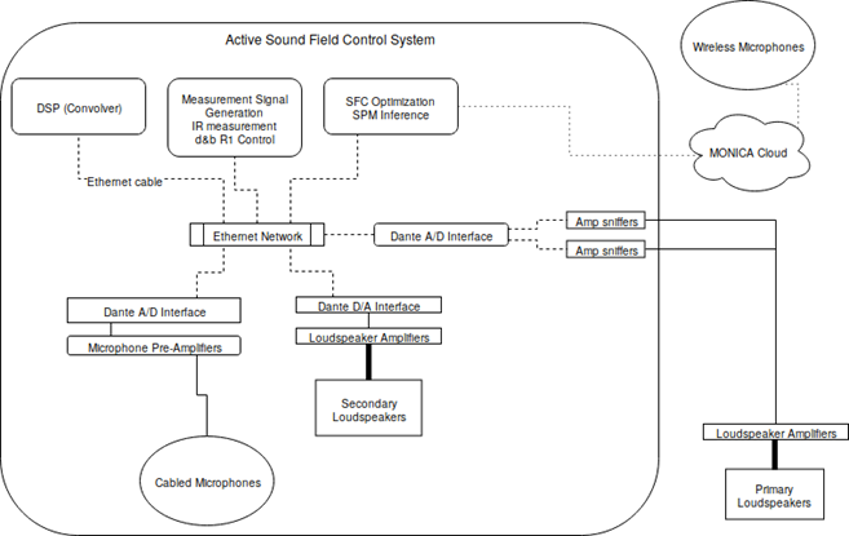 The DANTE protocol was selected for connecting ASFC system components because the distances between the components can be very long compared to standard audio device setup. To ensure the reliable signal transmission over several hundreds of meters, signal routing over ethernet cable is the most suitable approach. The ASFC system requires monitoring a high number of PA channels, but this can easily be done with the DANTE protocol.

During the cause of the MONICA project, the ASFC system has evolved from a lab-setup demonstrating the potential for low-frequency reductions in large dark zones, to a fully demonstrated field setup showing remarkable progress in performance from demo to demo. The sound field control has been successfully applied in outdoor conditions in a controlled scenario in Refshaleøen in Copenhagen presenting results up to 14 dB of sound reduction and in a real concert event Kappa FuturFestival in Torino with 6 to 8 dB. Test during Fredagsrock 2018 in Tivoli had to be cancelled due to bad weather, but a final demo in Roskilde College Concert in 2019 with new, improved propagation models showed very promising results. The basis for the consecutive improvements in performance is substantial refinements introduced in every link in the ASFC chain.

The experimental setup can be seen in the picture below.

The resulting insertion loss was measured during day one of the festival with filters computed from the day before. The results showed good results with a level of reduction of between 2-8dB. No sound propagation model was used in this pilot demonstration and a number of structures around the bright zone created some reflections that were not compensated. 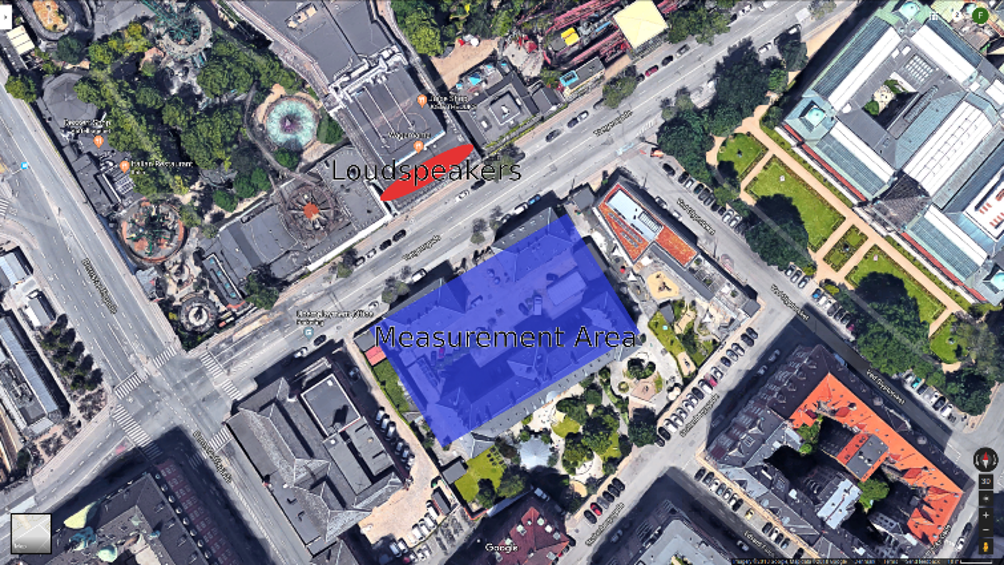 The results showed good results with a level of reduction of around 10dB. A basic sound propagation model was used. The day of the training before the festival was a sunny day and with low wind. Unfortunately, the day of the demonstration was rainy and windy and the propagation model did not work as expected. However, the lessons learned from this made much needed input for the adaptive propagation models under development.

The final demonstration was carried out at a concert at the Roskilde College, Denmark in 2019. For this demonstration, a fully developed with adaptive propagation models using the coherence method. In the coherence method, synchronized signal data is obtained from sensors close to the source (‘reference’ signal), and at locations where people are potentially annoyed (‘remote’ signal). The goal was to find the coherent part of the reference signal in the recordings, and from that to estimate the contribution of the concert. The coherence method requires audio recordings to be transferred to the cloud to perform the required contribution analysis. This necessitates a stable network that can transfer a relatively high rate of data (1 Mbit/sec) which was at hand at the Roskilde demo. The setup for the Contribution Analysis is presented in the figure below.

Contribution Analysis at Sound2019 - the Reference SLM is located near the Audience, the remote SLM is placed in the Dark zone

The basic function of the Adaptive Sound Field Controller is to optimize the radiation from the secondary sources in such a way, that the sum of sound pressures from the primary and secondary sources effectively reduces the total sound pressure level in the dark zone. The use of additional loudspeakers to control the sound in the dark zone must not negatively impact the sound experience in the audience area, the bright zone. This restriction must be included in the loudspeaker configuration design by either using directive loudspeakers facing away from the bright zone for the secondary sources or in the formulation of the loudspeaker signal optimization problem.

The figure below shows a schematic of the information flow in the acoustic closed-loop system. Compared to a traditional sound reinforcement chain, a Sound Field Controller is inserted, which is a processing unit in between the mixer and the loudspeaker system and computes the optimal loudspeaker signals. IoT enabled microphones and weather sensors are distributed throughout the venue and the control areas continuously measure the sound pressure field created by the ASFC system and current weather conditions. This data is made available to the Sound Propagation Module via the MONICA IoT platform. The Sound Propagation Module uses this data to estimate the transfer-functions between sound sources and the control areas, which are needed by the Sound Field Controller's optimization routine.