The magic of light in Lyon: MONICA at Fête des Lumières

Every year in December, the City of Lyon transforms its buildings, monuments, rivers and streets into light installations to celebrate the city and its cultural heritage. This year, Fête des Lumières or Festival of Lights takes place from 6th to 9th December, and MONICA is joining the magic to demonstrate its sound and crowd solutions. 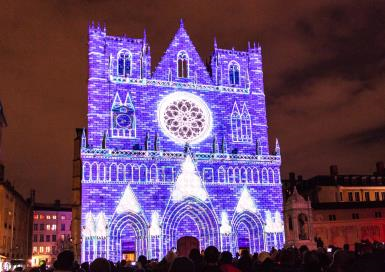 The cathedral Saint-Jean is one of more than 40 landmarks in Lyon which will transform into a light installation. Photo by Acoucité, licensed under Creative Commons CC-BY-NC

For a long time, light has played a special role for Lyon. The celebration of light is known to begin in 1643 where the city was hit by plague. As an attempt to reduce the impact, the city started paying tribute to the Virgin Mary, and a procession was organised to the Fourvière hill to light candles and pray.

In 1850, the city decided to erect a statue of Virgin Mary on the hill, overlooking and protecting the city. In 1852, the inauguration was scheduled for 8th September, but due to flooding it was postponed to 8th December, the date of the Feast of the Immaculate Conception. Again, it was cancelled, this time due to bad weather. Nevertheless, the residents commemorated the occasion by placing lit candles on their window sills and balconies, and they have done so ever since on this date.

The festival has since added new traditions, from illumination of shop windows in the 1960s celebrating the advent of Christmas, to the enforcement of a festival policy in 1989, which outlined the illumination of heritage sites to show the greatness of Lyon.

Today, the festival lasts for four days, earning Lyon the title of Capital of Lights, and the city puts on professionally run performances. The participation of Lyon’s residents remains strong as evidenced by numerous building facades being lit. Up to four million people visit the festival each year.

Placement of sound level meters and loudspeakers on Place Saint-Jean. The green line indicates the way into the square, the yellow areas mark where density is monitored and the red line is the way out. Map by Acoucité made with ArcGis Online

Based on the deployment of three IoT-enabled sound level meters on Place Saint-Jean, the most emblematic square of the festival, the aim of the demonstration is to get a more precise picture of the sound levels. MONICA solutions can help establish the sound picture from three perspectives: regulation (to confirm adherence to newly established noise limits), objective contribution (define noise sources and their contribution) and information (inform about sound levels and perception of sound according to a sound index). The information is displayed to the event manager in the MONICA User Interface, known as the COP.

Placement of MONICA cameras. Map by Acoucité made with ArcGis Online

Additionally, the organisers want to monitor crowd density in an efficient way. For this purpose, six cameras are used to produce crowd density maps as well as supply spectator counting at the entrance and the exit of Place Saint-Jean. The difference between entrance and exit counting provides an estimate of the overall density of the square. The event managers can follow the status in the COP and if the crowd limit is reached, notifications will be generated.

Finally, smart glasses and staff tracker apps are tested in terms of their potential for the reporting of incidents and for location of staff. Initially, they are used by a small, trained group of staff members out of the 1000 involved in the event which include the local police, national police, army and fire brigade.

For the next demonstration the aim is to improve the crowd counting technologies based on the first baseline data gathered at this year’s festival. Additionally, the practical use of the COP will be further extended in line with the enhancement of the MONICA solutions with regard to applicability, strength and reliability.